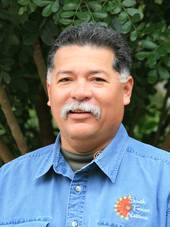 Robert Obregon was born and raised in Mission, Texas where he gained invaluable hands-on experience planting and harvesting a variety of vegetables.    Robert earned a B.S. in Agricultural Mechanics with a minor in Agricultural Economics from Texas A&I University in 1989. As an undergraduate, Robert worked for CKWRI with the thornless mesquite project and the deer project.  Robert came to South Texas Natives from the Texas Forest Service in 2007.   His diverse background in agriculture, mechanics, farming, carpentry, plumbing, electrical, and welding leads to his dual responsibilities at South Texas Natives including growing and harvesting native seeds and maintaining equipment.

Robert enjoys spending time on the family ranches in Duval and Kleberg counties.  He is married to Dr. Zonia Garcia-Obregon and they have two sons, Robert Jr. and Joel.  Together, they enjoy hunting, fishing, traveling and gardening.