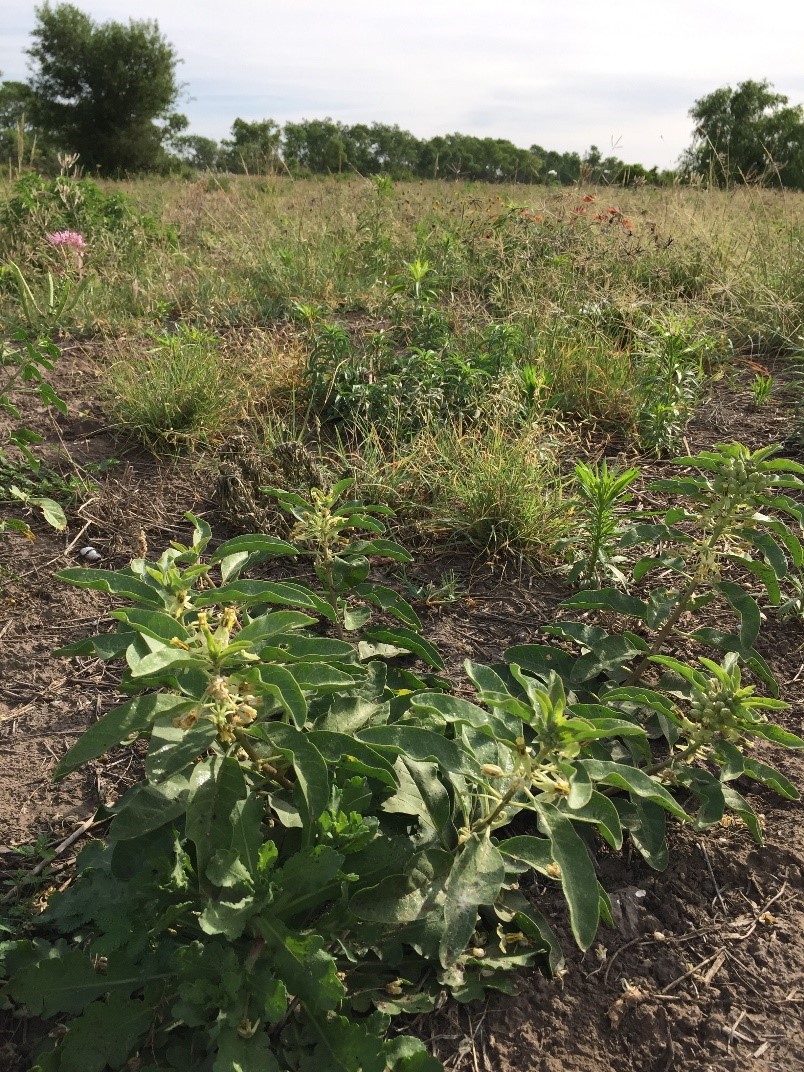 Converting land that was previously dominated by non-native grasses to diverse native grasslands to provide habitat for monarchs can be a daunting task, especially at large scales.  A recent project undertaken by Texas Native Seeds (TNS) and the Texas Parks and Wildlife Department (TPWD) Las Palomas Wildlife Management Area Staff,  and funded by the National Fish and Wildlife Foundation and Texas Parks and Wildlife Foundation, has provided a blueprint for landowners and agencies to follow if they wish to undertake such a task.

This project was undertaken on the Longoria Unit of the Las Palomas Wildlife Management Area (WMA) in northwest Cameron County in the Lower Rio Grande Valley.  Our objective was to restore 65 acres of previously cultivated land on the WMA to provide native grassland habitat for monarchs and other wildlife.  Since being under TPWD’s management the site had been managed to provide early successional habitat for doves, or was left fallow and periodically shredded in order to create access to hunters and edge habitat for northern bobwhites and doves.  Over time, this disturbance regime and the lack of a native seedbank because of many years of cultivation resulted in the dominance of non-native grasses, including old world bluestems, Johnsongrass, and Bermudagrass, which occurred in each of our 36 pre-treatment sampling quadrants. Other difficult-to-control weeds common on former croplands, including old man’s beard, silverleaf nightshade, and lead tree were prevalent on the site and were also common in pre-treatment sampling (Figure 2). 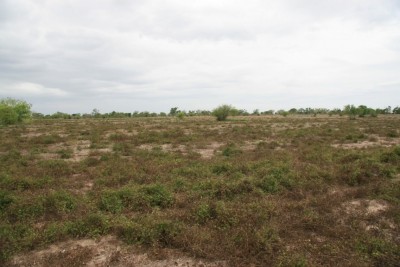 Seedbed preparation for this project was initiated in spring 2016. The site was shredded and disked to kill existing unwanted plants.  Following these initial mechanical treatments, the site was subsequently sprayed 8 times between April 2016 and July 2017 with several different herbicides to control the seedbanks and emerging plants of non-native grasses and other undesirable weeds. Herbicides utilized for site preparation included glyphosate (Roundup), sulfosulfuron (Outrider), triclopyr (Remedy), aminopyralid (GrazonNext HL), halosulfuron-methyl (Halomax), picloram and fluroxypyr (Surmount), and triclopyr and fluroxypyr (PastureGuard HL).    Each of these herbicides were used to target specific species including old world bluestems, bermudagrass, Johnsongrass, silverleaf nightshade, nutsedge, and old man’s beard, that would have limited restoration success. Once adequate control of unwanted vegetation was achieved, seeding was conducted on August 15-16, 2017.

We planted a seed mix of 42 locally-adapted native species, including 30 seed releases developed by TNS and the South Texas Natives Project.  The seed mixture included 17 native grasses planted at a rate of 40 pure live seeds per square foot.  The remainder of the species in the mix were forbs or legumes, and were planted at their respective recommended planting rates.  Fifty percent of the grasses planted were early successional species including slender grama, shortspike windmillgrass, and hooded windmillgrass.  In previous research we have determined that inclusion of this functional group of plants is critical when attempting to restore areas previously dominated by non-native grasses.  Each of these grasses germinates quickly, thrives in degraded soils, and competes readily with non-native grasses in the seedling stage. 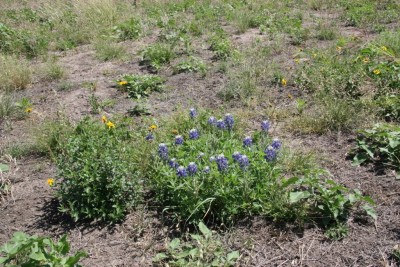 This site received typical fall rains shortly after planting, resulting in early establishment of many of the early successional grasses and a number of forbs by November 2017.   Vegetation measurements collected 90 days after planting indicated seeded plant densities of 1.1 plants/ft2 and 38% basal cover of seeded vegetation.  Following this initial data collection the site received very little precipitation through the first half of 2018.  Additional rain fell in June-July, 2018, and over 20” rain was recorded in September 2018.

Recent sampling indicates excellent restoration results in just over a year since planting.   Data from our October 2018 sampling effort indicates 87% basal cover of seeded native plants with only 3% basal cover of non-native grasses. Seeded plant density was measured at 1.7 plants/ft2, over 3x the plant density required for a satisfactory restoration stand rating by USDA’s Natural Resources Conservation Service (e.g. 0.5 plants/ft2).   Another measure of success pertinent to this project is species diversity; prior to restoration efforts, mainly as a result of previous cultivation history, species diversity was extremely low, made up almost entirely of non-native grasses and agricultural weeds addressed in the site preparation efforts.  For pollinators and monarchs, this was likely a major limitation to use of the site prior to restoration.  Now, according to the October sampling, all 17 reseeded native grasses have been restored to the site, and 16 of the 25 forb species planted have successfully established.  These include several important monarch nectar plants in the Lower Rio Grande Valley, such as tropical sage and awnless bush sunflower, and zizotes milkweed, the regional host plant for monarchs.   We documented monarch larvae on restored zizotes milkweed plants at the site just 90 days after planting in autumn 2017(Figure 4), and again in spring 2018. 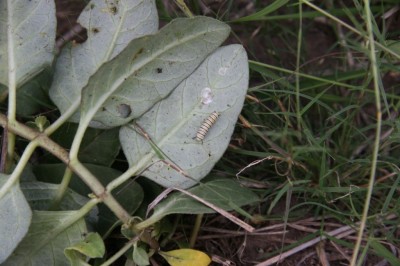 Figure 4. First instar monarch larvae on a zizotes milkweed restored on the Longoria Unit of the Las Palomas Wildlife Management Area in November 2017. 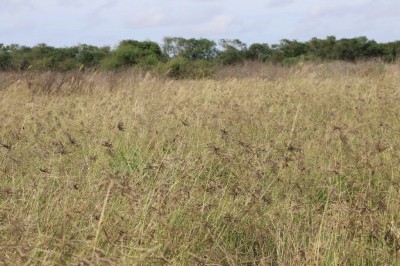 Restoration of this site has been a resounding success, and we hope it can serve as a blueprint for conversion of non-native grass-dominated areas, and former croplands, to diverse native grassland.  Such efforts should simultaneously provide habitat to both monarchs and other wildlife, especially northern bobwhites and grassland birds.

We are confident that the keys to success in this project were the repeated herbicide applications following initial mechanical removal of unwanted weedy vegetation and non-native grasses. These efforts controlled the above ground component of the non-native grasses and weeds, and also reduced the extensive seed banks that are common on areas that have long grown these plants.  Without such extensive seedbed and site preparation, as evidenced by scattered unsprayed areas near brush and along the perimeter of the planting, native seed establishment would have been pitifully low because of competition from faster emerging non-native grasses.  Another factor contributing to the success of this effort was the availability and use of seeds of a large variety of native plants, including grasses from various successional stages, as well as annual and perennial forbs and legumes.  Use of a diverse seed mix, in terms of both species and plant functional groups, helps avoid bare areas and open niches that are ripe for non-native grass and weed reinvasion.

In spring 2019, we are interested to monitor the prevalence of forbs and legumes in the established grass stand, and will work to determine use of the site by monarchs.  Late summer rains in 2018 resulted in prolific growth of native grasses, to the detriment of forb abundance this autumn.  A key question in monarch habitat restoration is if native grasses should be restored along with pollinator plants.  In this case, we felt establishment and longevity of sustainable grassland habitat would be impossible without native grass dominance (as is natural), especially in light of the extensive amount of non-native grasses in the vicinity that would easily outcompete a native forb and legume-only plant community.   In future years, management effort to reduce the native grass overstory to promote nectar plant growth could be warranted.

We will continue to sample this restoration effort for several years, and will eventually compile the data in order to document and publish the results of this project.  Future field days to demonstrate the success of the restoration effort are also planned.  For recommendations on seed mixes for similar efforts, or advice on seedbed preparation please contact us-we are glad to help!