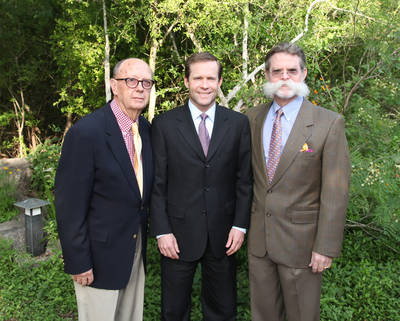 Passed from uncle to nephew to son, from father to son, from one University President to another, the realization of Caesar Kleberg's vision and his intent has been fulfilled since his death in 1946. His last will and testament established in 1943 the framework of the Caesar Kleberg Foundation for Wildlife Conservation, but those who loved and respected him charted his legacy.

The first Trustees were Robert J. Kleberg, Jr., visionary and President of King Ranch, Inc., Leroy G. Denman Sr., trusted attorney of King Ranch Inc., and Dr. Ernest Poteet, then President of Texas A&I University. These early leaders set the course for excellence in wildlife science and research. When Leroy Denman passed away in 1950, his son Leroy G. Denman, Jr. was asked to serve in his place as Trustee. These Trustees remained steadfast for twenty-four years until the passing of Robert J. Kleberg, Jr. His nephew, Richard M. 'Dick' Kleberg, Jr., became the fourth Trustee in 1974. When Dick Kleberg died five years later, the torch was passed to his son, Stephen J. 'Tio' Kleberg in 1979. That same year, Dr. Duane M. Leach was asked to fill the role of Trustee after Dr. Poteet retired as President of Texas A&I University. In 2013 when Leroy G. Denman, Jr. became Emeritus Trustee, Chris C. Kleberg, Tio's son, was asked to be a Trustee.  When Dr. Leach passed away in 2021, Robert "Jay" Kleberg, Tio's youngest son, was invited to serve as Trustee.

For the first twenty-five years of the Caesar Kleberg Wildlife Research Institute, three Trustees of the CKF, Tio Kleberg, Leroy G. Denman, Jr., and Duane M. Leach, created, supported, and nurtured the Institute from a fledgling staff of one Director and four scientists in 1981 to a vibrant, dynamic, cutting-edge, and renowned body of thirty-four scientists, sixteen staff, and sixty students. In the fiscal year ending August 31, 2020, this committed group of people received over $4.6 million in grants, contracts, and donations. The Institute has published over twenty-six books and has had over 900 articles in scientific journals. As of August 31, 2020, the science faculty have graduated over 340 students with a M.S. or Ph.D. in wildlife conservation and management and an untold number of undergraduates have been involved in research and influenced by the Institute's science team in one way or another.