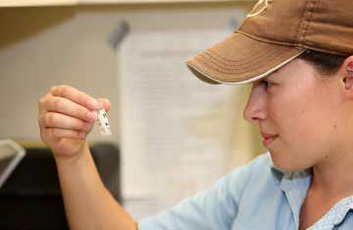 The development of new genetic markers, automation of laboratory instrumentation, and improved computing power has made large-scale genetic studies of wildlife populations feasible. When genetic tools became available, wildlife scientists began to use genetic methods to answer questions about wildlife ecology and behavior. This relatively new and rapidly expanding field is now commonly referred to as molecular ecology. Due to the ever widening array of questions that can be answered using genetic techniques, the Institute science staff recognized the need for on-site expertise to help integrate genetic components into studies of wildlife ecology and management. To this end, Drs. Fred Bryant and Lenny Brennan secured a grant from the Houston Endowment to support a Post-Doctoral position and hired Dr. Randy DeYoung in 2004. Dr. DeYoung became a full-time Research Scientist in 2006 to develop our molecular genetics component.

A significant milestone for the Molecular Ecology program was the establishment of the Molecular Genetics Core Laboratory in the summer of 2005. A generous grant from the Lawrence Family Foundation enabled the acquisition of a DNA sequencer and other necessary instrumentation and software. The Molecular Genetics Core Laboratory is divided into two sections: one which supports research on DNA sequencing and genotyping, supervised by Dr. Randy DeYoung, and one which is focused on RNA analysis and gene expression, supervised by Dr. Michele Garcia, a faculty member in the Department of Animal and Wildlife Sciences. The laboratory contains all the necessary instrumentation for the extraction and analysis of RNA and DNA, including real-time PCR and DNA sequencing instruments.

The first DNA sequence data, a portion of the maternally inherited mitochondrial DNA of a northern bobwhite, was generated in July 2005 by graduate student Erin Wehland. Since then, over 200 more quail sequences have allowed us to make inferences into the population structure and dispersal of quail populations in south Texas. A little over one year after acquiring a DNA sequencer, research on northern and masked bobwhite quail, white-tailed and mule deer, feral pigs, gray fox, and reddish egrets have resulted in over 1,500 microsatellite DNA genotypes and four hundred DNA sequences. Soon to be added to the species list of genetic studies are the wild turkey, hog-nosed skunk, and striped skunk.

The Molecular Core Laboratory is situated in the John Howe building on the Texas A&M University-Kingsville campus, in close proximity to existing core laboratories for clinical chemistry, cell culture, and nutrition analyses, as well as the USDA-APHIS Wildlife Services-Texas Field Station laboratory. This location is ideal to facilitate the sharing of resources among labs. Most important, however, is the sharing of ideas and opportunities for cross-training students in different disciplines.