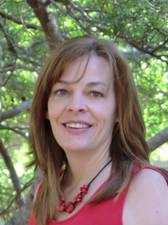 Sandra Rideout-Hanzak received her Ph.D. in Forestry from Stephen F. Austin State University in 2001.  Sandra then began a post-doc position as a research forester with the USDA Forest Service at their Southern Research Station in Athens, GA and later Clemson, SC.  In 2005, Sandra joined the faculty at Texas Tech University in Lubbock.  She was appointed to the faculty at Texas A&M University-Kingsville in 2010 where she is currently a professor and research scientist in the Department of Animal, Rangeland and Wildlife Sciences and Caesar Kleberg Wildlife Research Institute, respectively.

As a researcher, Sandra has explored such topics as effects of prescribed burning in various seasons on native grasses in the Coastal Marshes and Prairies and Southern Great Plains ecosystems of Texas; wildfire effects on vegetation, soil erosion, and avian communities; restoration of endangered slender rush-pea habitat; fire effects on hedgehog cactus varieties; and fire effects in southern pine, Piedmont, and Appalachian ecosystems.  Currently, Sandra is studying restoration methods of thornscrub plants for ocelot habitat, and season of prescribed burning effects on vegetation ecology and butterfly populations in southern coastal Texas.

Sandra is a certified Professional Wildland Fire Ecologist, and a founding member of the Association for Fire Ecology.  She is also a Lead Burn Instructor for the Texas Certified and Insured Prescribed Burn Manager Program.

Poncho Ortega and the rest of the CKWRI Deer Research team have a long history of supporting deer management and research in northern Mexico. This support has been in the form of annual presentations at landowner symposiums, visits to ranches interested in developing management programs, and a recent effort funded by the US Fish and Wildlife Service and headed by Sandra Rideout-Hanzak to engage ranchers in northern Mexico. This most recent project brought landowners to Kingsville for workshops, CKWRI deer scientists to northern Mexico to tour ranches, and was capped by publication of a wildlife management handbook written in Spanish for distribution to Mexican ranchers. The book covers the basics of cattle-wildlife operations: management plans for determining objectives of the operation, vegetation and wildlife surveys, habitat management practices, record keeping, monitoring, and wildlife harvest quotas. At the end of 2015, Randy DeYoung and Poncho Ortega were invited to speak at the Annual White-tailed Deer Symposium in Monterrey, Mexico.