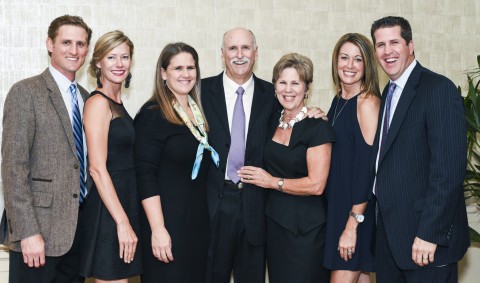 In October, Fred C. Bryant, Ph.D. was honored as the 2016 Texas Outdoorsman of the Year. The ballroom at the San Antonio Country Club was filled with more than 100 close friends, family, and conservationists from across the state who gathered to commemorate Bryant’s induction into the distinguished group known as Outdoorsmen.

Bryant is regarded as a giant in the conservation world and is a personal hero to countless outdoorsmen. His influence among his students and friends is hard to quantify, but it is guaranteed that this infectious zeal for wildlife and habitat conservation is due to the fact that he has followed his passion in life. He has made a career out of sharing his love and passion for the great outdoors.

He may be best known as the Director of the Caesar Kleberg Wildlife Research Institute, but Bryant should also be known as an educator, a researcher, a leader, a promoter of others, a fundraiser, a husband, a father, a friend and a man of faith.

A hunter all his life, it was his connection with and respect for wild creatures that attracted Bryant to the wildlife program at Texas Tech where he was offered a full-ride football scholarship, and was red-shirted his first three years. That meant he practiced with the team but didn’t travel with the team on game weekends.  It was a perfect situation, Bryant said, because that freed him and his buddies to go hunting on the weekends.

Following Texas Tech, Bryant went on to Utah State University and earned his M.S. in Wildlife Biology before getting his doctoral degree in Range Science from Texas A&M University.

Upon completing his doctoral program, Bryant returned to Texas Tech and became an assistant professor in the range and wildlife department, where he made an indelible mark on his students during his 19-year tenure.

In 1996, Bryant made a life changing career move. Bryant was offered the job to be the director of the Caesar Kleberg Wildlife Research Institute. For him it was a dream come true as it was a job he’d thought about for years.

Tio Kleberg, chairman of the board of the Caesar Kleberg Foundation for Wildlife Conservation said, “Typically there are people who are wonderful scientists, or people who can write, or market, but very few, and I don’t know another equal to Fred, who understand the science, who understand its implications, who can write the reports and then go out and raise the money for the research. Plus, not only do people really like Fred, but landowners trust him.”

It is this unique skill set that sets Bryant apart and has allowed him to be a tremendously effective fundraiser for CKWRI and responsible for securing research funding making the Institute the largest of its kind in the world.

“Whatever your passion in life is do it. Set a goal and don’t take your eye off that goal.” –Fred Bryant