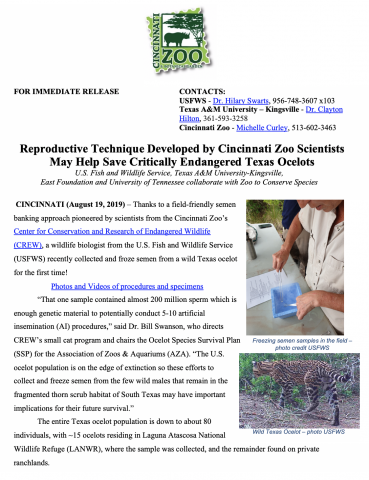 CINCINNATI (August 19, 2019) – Thanks to a field-friendly semen banking approach pioneered by scientists from the Cincinnati Zoo’s Center for Conservation and Research of Endangered Wildlife (CREW), a wildlife biologist from the U.S. Fish and Wildlife Service (USFWS) recently collected and froze semen from a wild Texas ocelot for the first time!

Photos and Videos of procedures and specimens

“That one sample contained almost 200 million sperm which is enough genetic material to potentially conduct 5-10 artificial insemination (AI) procedures,” said Dr. Bill Swanson, who directs CREW’s small cat program and chairs the Ocelot Species Survival Plan (SSP) for the Association of Zoos & Aquariums (AZA). “The U.S. ocelot population is on the edge of extinction so these efforts to collect and freeze semen from the few wild males that remain in the fragmented thorn scrub habitat of South Texas may have important implications for their future survival.”

The entire Texas ocelot population is down to about 80 individuals, with ~15 ocelots residing in Laguna Atascosa National Wildlife Refuge (LANWR), where the sample was collected, and the remainder found on private ranchlands.

Dr. Swanson, with assistance from Dr. Tom deMaar at the Gladys Porter Zoo, trained USFWS biologist Dr. Hilary Swarts to collect semen samples from cats using a urethral catheterization method and then quickly freeze the samples as pellets directly in liquid nitrogen.  The semen was collected and frozen by Dr. Swarts opportunistically as part of the USFWS’s ocelot monitoring program and then shipped to CREW for storage in liquid nitrogen tanks.  Post-thaw analysis of a few sample pellets revealed adequate sperm motility to fertilize domestic cat oocytes in vitro and possibly be suitable for use with AI.

In March, CREW demonstrated the feasibility of using frozen semen from a zoo-housed ocelot for successful AI, with the birth of two ocelot litters and three healthy kittens at the Arizona Sonora Desert Museum and the El Paso Zoo.

“By banking semen from ocelots living on both public and private lands in Texas, one primary goal of this collaborative project is to conserve as much remaining genetic diversity as possible from this endangered population for future conservation and recovery efforts,” said Swanson.

CREW also is collaborating with Drs. Michael Tewes and Clayton Hilton of the Caesar Kleberg Wildlife Research Institute at Texas A&M University-Kingsville and Dr. Ashley Reeves at the University of Tennessee to begin collecting and banking semen from ocelots living on East Foundation properties in Texas. The East Foundation’s ranchlands are used extensively for research efforts aimed at wildlife management and rangeland health.  For this project, Dr. Reeves, a veterinarian now working on her PhD, will receive training at CREW later this year in more refined reproductive techniques for semen collection, analysis, freezing, IVF and AI in cats.  Her study will provide greater insight into the reproductive status of wild Texas ocelots, while concurrently recovering valuable semen for genetic banking and potential use with assisted reproduction at a later date.

The world-famous Cincinnati Zoo & Botanical Garden is committed to inspiring visitors to care about wildlife and wild places.  It was voted the #1 Best Zoo in a USA TODAY reader poll and has also received rave reviews from Child Magazine, Parents Magazine, USA Today and TripAdvisor.  Over 1.8 million people visit the Zoo’s award-winning habitats, and more than 500 animal and 3000 plant species annually. The Zoo, an accredited member of the Association of  Zoos & Aquariums (AZA) for almost 30 years, is internationally known for its success in the protection and propagation of endangered animals and plants and engages in research and conservation projects worldwide. Known as the #GreenestZooInAmerica, the Zoo is doing its part to conserve natural resources that are critical to saving wildlife and its habitats and is committed to greening its daily operations and reducing its impact on the environment with rain gardens, recycled building materials, solar panels and more. The Cincinnati Zoo is a 501(c)(3) nonprofit organization.