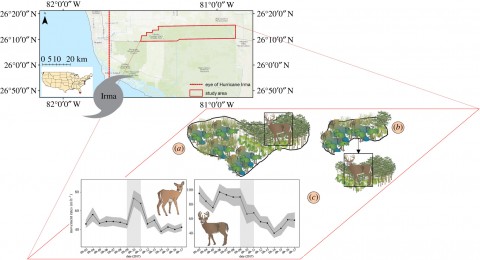 Extreme climatic events (ECEs) are increasing in frequency and intensity and this necessitates understanding their influence on organisms. Animal behaviour may mitigate the effects of ECEs, but field studies are rare because ECEs are infrequent and unpredictable. Hurricane Irma made landfall in southwestern Florida where we were monitoring white-tailed deer (Odocoileus virginianus seminolus) with GPS collars. We report on an opportunistic case study of behavioural responses exhibited by a large mammal during an ECE, mitigation strategies for reducing the severity of the ECE effects, and the demographic effect of the ECE based on known-fate of individual animals. Deer altered resource selection by selecting higher elevation pine and hardwood forests and avoiding marshes. Most deer left their home ranges during Hurricane Irma, and the probability of leaving was inversely related to home range area. Movement rates increased the day of the storm, and no mortality was attributed to Hurricane Irma. We suggest deer mobility and refuge habitat allowed deer to behaviourally mitigate the negative effects of the storm, and ultimately, aid in survival. Our work contributes to the small but growing body of literature linking behavioural responses exhibited during ECEs to survival, which cumulatively will provide insight for predictions of a species resilience to ECEs and improve our understanding of how behavioural traits offset the negative impacts of global climate change.

A longstanding goal in ecology is to understand the mechanisms that link abiotic factors to organisms and populations. Associated with global climate change, there has been a rapid increase in frequency of extreme climatic events (ECEs). ECEs are weather events that alter ecosystem structure or function outside of the bounds of typical stochasticity [1]. Increased frequency of ECEs has fostered interest in their wide-ranging impacts on ecosystems [1–6]. ECEs have been shown to cause rapid mortality in populations [7–10], broad-scale and enduring alterations in ecosystem function and community structure [11–14], and shifts in ecological community boundaries [15]. The negative consequences of ECEs necessitate a need to understand mechanisms behind resiliency in ecological systems.

Populations can exhibit resiliency to ECEs given favourable habitat heterogeneity over longer time-scales [16–19], but relatively less is understood regarding movement and habitat selection during the event. Studies examining mitigation tactics in regards to ECEs are needed to aid in understanding and predicting how organisms respond to global climate change [20,21]. However, because of their unpredictable nature, quantifying such mitigation tactics is logistically difficult and often opportunistic, given that ECEs cannot be planned for in the study  All rights reserved. design phase or easily replicated. However, determining which behaviours have the capacity to mitigate negative impacts allows for the quantification of survival mechanisms. Improving our understanding of survival mechanisms allows for more precise predictions regarding vulnerability and persistence for populations in ecosystems where ECEs are predicted to increase [20,21]. Given the limited research regarding behavioural mitigation, such strategies are probably ignored in ecosystem-level climate change assessments.

A limited number of studies have examined alterations in movement patterns during ECEs, which have highlighted mechanisms promoting resilience [22–24]. However, examples are limited to smaller-bodied organisms and are often unintentionally conducted and lack replication because ECEs are unpredictable [22–27]. Further, most studies examining species responses to ECEs are often over longer time-scales and fail to identify the behavioural mitigation strategies which impact survival during ECEs. Given the unpredictability of such events, reporting opportunistic observations, especially observations during ECEs, are valuable because they highlight mechanisms that promote resilience and add to the body of knowledge in regards to species-specific resilience to ECEs, and more broadly climate change.

The range of behavioural responses to ECEs is predicated on phenotypic plasticity. In systems that experience recurrent disturbances (e.g. fire return intervals, hydrological cycles), animals are predicted to have phenotypic adaptations to such disturbances as doing so improves fitness [28,29]. For instance, ephemeral wetland breeders, Bufo americanus tadpoles, displayed greater plasticity in metamorphosis timing than a permanent wetland breeder, Rana utriculari [30]. Further, in systems where environmental variability is high, behavioural plasticity is expected to be greater [31,32]. For example, post-fire succession has shown to have a ‘magnet effect’ for some herbivores such that they alter movement behaviour [33–37] and crepuscular, seasonal and successional habitat-use patterns [33,35,38–41] to take advantage of high-quality forage promoted by recurrent fire regimes. Thus, animals that evolve in systems with recurrent disturbances are predicted to have greater behavioural plasticity and therefore may have greater resiliency to ECEs [42,43].

The intensity of disturbance (e.g. wind speed) associated ECEs, and the relative protection provided to an animal in a patch can vary across landscapes, resulting in heterogeneity in severity of ECEs [44–46]. Animal distributions relative to spatial variation in severity can influence the effects of ECEs on populations [44–46]. Combining information regarding habitat heterogeneity, ECE refuge habitat, and habitat use by organisms during an ECE allows for more accurate quantification of the population-level impacts of ECEs. For instance, if habitat use was greater in a habitat type that provided refuge from an ECE, negative effects on populations would be less than if individuals were randomly distributed. Mobile species may modify their distributions relative to severity by moving to refugia [24]. However, few studies have investigated survival and habitat selection during an ECE.

The frequency of hurricanes has increased as a function of intensifying Atlantic warming [47]. Florida sustains more hurricanes than any other state in the USA [48], and experiences numerous tropical storms annually [49]. Distinct wet and dry seasons characterize the Big Cypress Basin physiographical region of southwestern Florida, with 60% of rainfall occurring between May and October, leading to seasonal inundation [49]. Relative to white-tailed deer (Odocoileus virginianus) populations in other parts of their range, white-tailed deer (O.v. seminolus, hereafter deer) in southwestern Florida occur in lower densities and exhibit lower birth rates, smaller body size, and unique adaptations owing in-part to poor quality soils and seasonal flooding [50–54]. Previous studies have documented deer survival during hurricanes and hypothesized behavioural mechanisms that promote survival (e.g. seeking open prairies free from falling trees, treading water until surge passes) but no behavioural data were collected during the storm [55,56].

Hurricane Irma made landfall on 10 September 2017 where we were remotely monitoring deer using GPStelemetry. Fine-scale spatio-temporal GPS data allowed us to assess deer survival and behaviour during one of the strongest hurricanes on record in the Atlantic basin [57]. Few studies examining animal’s responses to ECEs have documented individuals surviving ECEs [22,24,55,56,58]; however, in most cases, the mechanisms governing survival remain mostly unknown [22]. Spatial variation of an ECE’s influence within a landscape may allow mobile species to mitigate the effects of an ECE if they can access areas of lower ECE severity [22]. We report on an opportunistic observation of deer impacted by Hurricane Irma to provide a unique case study of the behavioural response of a large mammal during an ECE, mitigation strategies for reducing the severity of the ECE effects and the demographic effect of the ECE based on known-fate of individual animals. Our work contributes to the small but growing body of literature linking behavioural responses to ECEs to survival, which cumulatively will provide insight for predictions of a species’ resilience to ECEs and climate change.