How to Save the Planet with Grass Seed 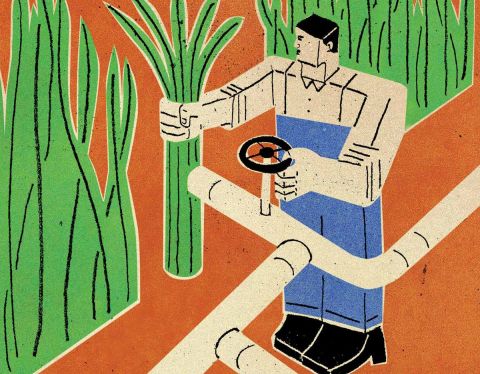 Our age has become one of escalating warnings and anxieties about many things, but the biggest of all is climate crisis. Young people the world over are crying out for a reckoning of previous generations’ knowing destruction of the natural world.

Although the modern environmental movement has been widespread and successful in many ways, it has not kept pace with the ongoing industrial growth and urbanization of the planet.

News stories rightly focus on the destruction, but ecological restoration efforts have proliferated around the world in recent years. One such effort in Texas has been successfully working to restore the natural order on disturbed lands throughout the state for 20 years.

The Texas Native Seeds Program, based at Texas A&M University-Kingsville, within the Caesar Kleberg Wildlife Research Institute, has garnered the support and investment of an unlikely assortment of eager public and private partners, now representing all of Texas. Theirs is a classic story of human ingenuity patiently working to solve existential ecological challenges and gradually scaling up the practices to make real change.

The Texas Native Seeds Program sprang from the need of South Texas ranchers for a reliable source of native plant seeds to restore thousands of acres of rangelands impacted by expanding transportation infrastructure and energy exploration. During the 1990s, those ranchers, initially led by King Ranch and its peers, turned for help to a small, local university with the necessary programs in agriculture and wildlife management.

For generations, Texas A&M University-Kingsville, which was chartered in 1917, has been training Texas ranch owners’ children to return to ranch life through courses in agricultural sciences and their practical application. The university is now well-known for training leaders in the range and wildlife management professions through the Caesar Kleberg Wildlife Research Institute. Texas A&M-Kingsville was the obvious academic partner as ranchers came to value the restoration of native plants and wildlife habitats for both economic and philosophical reasons.

When the ranchers began discussions with the university scientists, the main products in use for restoring vegetation to thousands of acres of rangelands on private property were imported grasses, most native to Africa and Asia, which had been found to grow well in the Texas environment. These grasses had been in use long enough for the commercial seed suppliers to focus production on providing adequate amounts of these non-native plant seeds, to the exclusion of native species.

By then, the use of the non-native species also had been adopted by most state agencies, such as the Texas Department of Transportation. With no native grass seeds commercially available, and TxDOT’s huge need for grass seed, the agency had used non-native grasses along the roadways throughout the state, covering more than 1 million acres of managed land. And, of course, because of their availability, non-native grasses also were used throughout the state by other industries, including the energy industry. In all of their re-vegetation and restoration activities after drilling, building pipelines, and along countless miles of electricity transmission corridors, they restored disturbed land with non-native grasses.

According to Forrest S. Smith, director of the Texas Native Seeds Program, “What brought landowners to the table were the unintended consequences made clear by nearly a hundred years of use of non-native grasses.”

Those unintended consequences included the aggressive spread of the non-native grasses far beyond where they were planted, overwhelming the native species of grasses, wildflowers and all other native plants, which gradually disappeared or went dormant deep underground. And of course, all of the native wildlife that depended on those disappearing species for food and shelter found less and less territory where they could thrive. They soon disappeared, too, moving to smaller and smaller footprints of available sustenance, gradually losing their reproductive capacities.

The non-native species that transformed the grasslands had supported livestock production, but land-management philosophy has shifted dramatically from the early days. Succeeding generations of ranchers have placed greater value on the health and well-being of the natural wildlife and on converting to a more self-sustaining land use. Those new values called for the restoration of native habitats.

The new priority for South Texas ranchers was to find ready sources of native plants to use in their restoration projects. But the shifting value system among landowners had far outpaced the commercial world of plant and seed development, and early adopters of the restoration ethic found that almost no appropriate native plant seeds were available for use in South Texas. Landowners and scientists knew the time to act was upon them.

The South Texas Natives Project, as it was called at first, began in 2001 with the ranchers, Texas A&M-Kingsville researchers and their students searching thousands of acres of land throughout South Texas for any remaining stands of native grasses and other native plants for seed collection.

The program was given a huge boost early on when the Texas Department of Transportation saw a match for their long-term efforts. TxDOT operates under the federal mandates of the National Environmental Policy Act, the Clean Water Act, the Endangered Species Act and the Noxious Weed Act. Their challenges are huge in meeting all requirements while also maintaining aesthetically pleasing and wildlife-sustaining plantings throughout the state. They now strive to use native plants not only for the aesthetic value, but because they require less attention through drought and flood or whatever else the dramatic weather patterns of Texas present.

With the TxDOT partnership, the South Texas Natives Project expanded over the next 10 years with the focused cooperative efforts of Texas A&M-Kingsville’s scientists and students, along with more and more landowners, the USDA Natural Resources Conservation Service and private seed companies, especially Douglass King Seed Company in San Antonio.

The tedious process of searching for and collecting seeds of native plants was replicated over and over as the demand grew statewide. In 2011 the program was renamed the Texas Native Seeds Program, and over the next eight years, the hundreds of program participants have collected, increased and commercialized 40 native plant species.

During this process, landowners’ growing demands for using only native plants on their properties have had a profound effect on another large Texas industry — oil and gas exploration. And that industry, as it has boomed in the last 10 years, has subsequently added substantial acreage of Texas land to the native plant restoration program.

That beneficial development came about as oil companies sought to lease private lands for exploration, and the participating landowners wrote into their lease contracts the requirement that all disturbed land must be restored with specified native Texas plants. By naming the Texas Native Seeds Program as the source of information, seed and assistance with implementation, the landowners sealed the success of the program.

The oil companies have used Texas native seeds and plants throughout the state to restore huge swaths of land within energy rights of way, pipeline construction pathways and electric transmission rights of way.