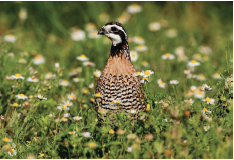 by Nicole Traub and Alan Fedynich

As many know, bobwhites and scaled quail are extensively studied at the CKWRI.  To help bridge some gaps in our understanding of parasites infecting these gamebirds, students in Alan Fedynich’s lab have spent the last 4 years gathering information on helminth parasites in South Texas.  Two M.S. students who have since graduated, Andrew Olsen and Stephanie Shea, examined hunter-shot quail for internal parasites—studies that updated our knowledge (the most recent previous study was conducted over 3 decades ago).  We found 12 helminth species, including the super abundant cecal worm (78–81% of quail infected).  The eyeworm also was found, but it seemed to rarely occur (4–9% of the quail were infected), unlike findings from the Rolling Plains where more than 50% of the quail are infected.  Both students assessed variation in parasite load by quail age, quail sex, and collection year.

Ph.D. student Nicole Traub will continue adding to the long-term database.  She has already found a parasite that has not been reported from South Texas.  From this past hunting season, Nicole found a scaled quail from Zapata County infected with a tapeworm in the genus Mesocestoides, which has an indirect life cycle using 3 hosts:  insect, quail, and carnivore (coyote, ocelot, or another carnivorous mammal).  First, an insect eats tapeworm eggs deposited into the environment via an infected carnivore’s feces, then a quail eats the infected insect.  While in the quail, the immature tapeworm migrates to the lining surrounding the heart, crop, and body cavity.  There it waits for the quail to be eaten by a carnivore so it can develop into an adult, reproduce, and release eggs back into the environment.

Unfortunately, humans can also become infected by ingesting the worm in its larval stage.  As of 2016, the CDC estimates 30 cases of human infections with adult Mesocestoides tapeworms have been documented worldwide, 10 of which occurred in the United States.  We urge hunters to use caution when cleaning quail.  If the quail has wet-looking white or cream colored oval spots on the flesh or organs (see photo), we suggest the quail be discarded and not eaten by human or animal.  Discard the carcass in a place where other carnivores, including your hunting dogs, cannot eat it, and be sure hunters and carcass cleaning personnel thoroughly wash their hands after touching an infected quail.

In addition to the long-term parasite survey data being collected, Nicole’s study also will focus on factors that potentially influence the quail-parasite relationship, factors which we know very little about, such as interactions between rainfall, quail density, and parasites.  Because rainfall is integral to quail population dynamics, we will be examining the relationship between rainfall, insect abundance, and quail population density spanning a 7-year period (2012–2019), hopefully capturing an entire boom-and-bust cycle.

This year, we are planning to examine the population dynamics of insects that serve as food for quail as well as intermediate hosts for parasites.  We are partnering with several ranches to collect insects.  We want to track insect abundance to (1) determine which insects are available as food for quail, (2) determine which insect species are being used as intermediate hosts, (3) estimate the percentage of the insect population infected by larval stages of parasites, and (4) examine the relationship between insect abundance and rainfall.

Holistic studies like ours are needed to understand interrelationships among host, parasite, and the environment.  Thus far, we have learned what helminth parasite species occur in South Texas.  Now, we are taking the next essential step to see what environmental factors are influencing the dynamics of the quail-parasite system occurring in South Texas.