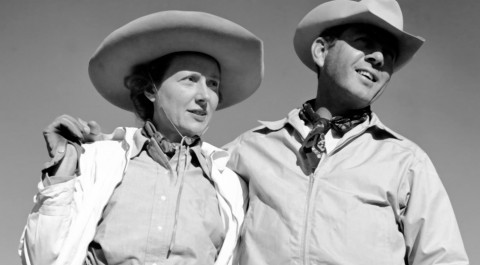 Caesar Kleberg Wildlife Research Institute is grateful for the tremendous ongoing support that we receive from a variety of sources.   There is a special group of contributors that we recognize as "Research Partners" as they have provided instrumental backing of our research and therefore have helped make the applicable science that we are so proud to offer possible.  We want to thank all of our Research Partners, and will begin by sharing the story of the Robert J. Kleberg, Jr. and Helen C. Kleberg Foundation as our first "Research Partner Spotlight".

Helen C. and Robert J. Kleberg, Jr. spent their lives working on their family’s King Ranch in South Texas. Both were deeply committed to supporting and improving quality of life through community support, innovation and scientific research. Bob Kleberg had a lifelong interest in wildlife research and natural habitat stewardship, as well as genetics and veterinary medicine, and was a successful breeder of livestock. Not only did he create the Santa Gertrudis breed of cattle, but he also bred numerous champion quarter horses and thoroughbred racehorses including the Triple Crown winner Assault. In addition, he was a pioneer for wildlife conservation and provided the impetus and funding for agricultural and scientific research in various fields worldwide. Helen was an avid reader and had a deep interest in the arts and education. She ensured that children attending King Ranch schools received a strong education. As a photographer she documented life on the ranch as she worked alongside her husband.

Together they established the Robert J. Kleberg, Jr. and Helen C. Kleberg Foundation in 1950 in Kingsville, Texas, to support their philanthropic interests. To date, over $334M in grants has been awarded with a major focus on medical and basic science research. Ongoing relationships with universities and medical schools have contributed to noteworthy successes including the impacts through the Foundation’s support of Caesar Kleberg Wildlife Research Institute.  The Foundation has been instrumental in promoting migratory bird research and the Texas Native Seeds program that translates to habitat restoration through native plans.  The Foundation continues to strive toward advancement of knowledge and community support and takes pride in the vision of its founders and the many accomplishments of its grant recipients.

Because of the location of the King Ranch, the Klebergs had a first-hand relationship with the land and the diverse wildlife that the area supports.  Although the advanced data that we have today didn’t exist in their lives, they recognized and valued how important the Texas Coast is to migratory birds and other wildlife. Today, millions of bird watchers come from around the world to the Texas Coast to witness the spectacle of birds migrating through the region. Despite this knowledge, empirical data on numbers of birds migrating through the region has only recently been available, thanks largely to the Robert J. Kleberg, Jr. and Helen C. Kleberg Foundation. Monitoring migratory bird passage through a region has been hampered by available techniques that effectively detect birds passing through the airspace. This technology has only been available since the early 2000s and uses specially designed, mobile radar stations.  While this technology is expensive, it provides invaluable information on bird passage rates, temporal changes in passage, altitude of passage, and flight directions – all critical information for resource managers about potential effects of human development on migratory birds. The research funded by the Robert J. Kleberg, Jr. and Helen C. Kleberg Foundation was especially important because the wind energy industry had initiated development of several wind farms along the lower Texas Coast. There was a great need for empirical data to help provide guidance to the wind industry on best placement of wind farms to reduce potential negative impacts to the millions of birds that migrate through the region each spring and autumn.

The research confirmed that the Texas Coast has some of the highest passage rates of migratory birds in the world.  This information reinforces the importance of the Texas Coast in conservation of bird populations across the continent and provides land managers critical information so they can make decisions with migrating birds in mind.  In addition to enabling CKWRI to conduct the bird migration study, the Robert J. Kleberg, Jr. and Helen C. Kleberg Foundation continues to fund migratory shorebird research because of the vast numbers of these species that use the Laguna Madre as part of their annual migration.

The Klebergs embodied the belief that habitat equals wildlife and were dedicated land stewards.  In the late 1990s, the Institute received daily calls or emails addressing “why aren’t native plants available for restoration?”.  At the time, the Institute’s answer was that no one was focused on that in Texas at a scale large enough to make a difference. For decades USDA-NRCS had native plant development in their research portfolio and 3 plant materials centers existed in Kingsville, Nacogdoches, and Knox City. They did some of the early groundbreaking work but it never successfully made it to a seed dealer who could mass produce enough seed for landscape-scale projects, and they also faced the challenge of not having the staff to focus on collections and evaluations outside of the plant materials center.

In 2000, the Institute began looking at a way to expedite this important project. Following meetings with landowners across South Texas who were all were extremely interested in CKWRI taking this on, the Institute knew it would require funding at a level way beyond the Institute’s financial resources. In 2001, the Robert J. Kleberg, Jr. and Helen C. Kleberg Foundation stepped in and stepped up with a major grant as our first Founding Sponsor for South Texas Natives. Today, thanks to their vision and commitment, Texas Native Seeds has grown out of South Texas Natives and now spans all of Texas in terms of providing native seeds for large-scale restoration. Without the initial support, encouragement and leadership from the Robert J. Kleberg Jr. and Helen C. Kleberg Foundation, Texas Native Seeds would have never grown into the successful program that it is today.

Thanks to visionary land stewards like Helen and Robert Kleberg, Jr. and their family’s continued commitment to wildlife and habitat, CKWRI is nationally recognized as the leader in wildlife research, providing applicable tools to help conserve our natural resources.  We are honored to call the Robert J. Kleberg, Jr. and Helen C. Kleberg Foundation Research Partners.