Season of Burning and Large Mammal Usage of Gulf Cordgrass 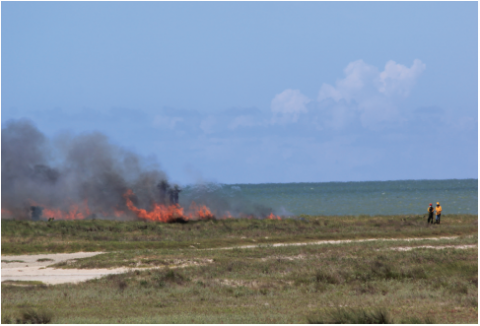 Providing high-quality forage for cattle and large wildlife species can be challenging on some rangelands when vegetation becomes mature and too coarse to be eaten.  This is a common problem in gulf cordgrass communities.  Gulf cordgrass is a highly productive perennial grass native to the Texas Coastal Prairies.  When young, gulf cordgrass can provide high quality forage for cattle.  However, as it matures the leaf blades become stiff and spine-like with low nutritional value.

Prescribed fire has been used as an effective way of removing the standing old growth of gulf cordgrass and replacing it with more palatable and nutritious forage.  Ranchers have often burned gulf cordgrass in the fall to improve its quality and to use it as a reserve source of forage for cattle during winter dormancy or drought.  The optimal season for burning gulf cordgrass to improve nutritional value for wildlife and domestic animal usage, however, is still unclear.

To determine the best time of year to burn gulf cordgrass, we began applying prescribed fire during winter and summer on the East Foundation’s El Sauz Ranch in Willacy County, TX.  Each winter (January–February) and summer (July–August) for 2 years we are burning 2 pastures that are at least 500 acres each.  We have completed 2 winter and 1 summer burn seasons, and we will conduct our last set of summer burns this year.

We have also been tracking the movements of 30 head of cattle using GPS collars, and we have been conducting vehicle counts of large ungulates—cattle, white-tailed deer, and nilgai.  GPS collar data have shown that cattle spend more time in the burned areas during the 90 days following the burns than they do before those areas were burned, regardless of burning season.  Observations conducted by vehicle are also indicating more use by cattle, white-tailed deer, and nilgai within recently burned areas than in non-burned areas.

To understand better why animals are more attracted to recently burned areas, we collected forage samples on a weekly basis for 90 days following the first summer and winter burns.  These forage samples allowed us to analyze and monitor fluctuations in crude protein and fiber levels.

Our forage analyses determined that for roughly 90 days following both winter and summer burns crude protein levels within regrowth were maintained above 7%.  This is an important finding because rumen microbial activity is severely impaired when protein levels fall below 7%.  Fiber content was reduced following both burns for 90 days, resulting in higher intake and digestibility.  The continued utilization within the burned plots contributes to maintenance of high crude protein and low fiber in the forage as the continual grazing is slowing plant maturation.

Gulf cordgrass has the potential to be a valuable grazing forage if properly managed to maintain an active growth stage.  When applied properly, prescribed fire is a tool that can greatly improve the forage value of gulf cordgrass.

As we complete this project, we will be able to give natural resource managers recommendations for optimal burning season and cattle stocking rates to combine in a patch burning and grazing scenario for maintaining gulf cordgrass at its highest quality.