Home
Study Of Pronghorns In Panhandle Assessing Movement, Use Of Crops

Study Of Pronghorns In Panhandle Assessing Movement, Use Of Crops 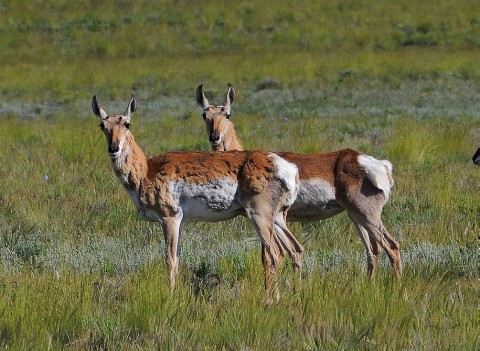 DALHART — Over the last decade or two, pronghorn antelope numbers in the Texas Panhandle have been on the rise.

According to the Texas Parks and Wildlife Department’s pronghorn program leader Shawn Gray, the population has basically doubled over the last 20 years.

An ongoing research project in the Texas Panhandle is helping to broaden the knowledge about the ecology of the pronghorn antelope. The study, commissioned by TPWD in part through the use of Pittman Robertson Act funds, is focused on learning how the pronghorn move about the Panhandle landscape, more specifically how they utilize field crops in conjunction with the native rangeland. The research scientists doing this portion of the study are with the Caesar Kleberg Wildlife Research Institute at Texas A&M-Kingsville.

“Probably part of the reason for the growth of the Panhandle population is the use of these ag fields,” says Dr. Tim Fulbright, research scientist with CKWRI and one of the principals on the project. “We’re trying to figure out just how important these ag fields are for pronghorns, how much time do they spend in them, the crops being used and how important are these fields seasonally or are they used year-round.”

The researchers are also investigating barriers to movement, survival and home range.

“We don’t know a lot about the ecology of pronghorns in the Panhandle,” Fulbright said. “The few studies that have been done were done long before the more modern telemetry that is available today.”

When Fulbright did his graduate work on pronghorns on a ranch in Borden County back in the mid-1970s, the best method they had to locate the animals was to drive around with a spotting scope. Then VFH radio telemetry was developed.

“We’d put a collar on one of the animals and then triangulate the position, either flying or driving, and home in on it,” explains Fulbright. “With the old VFH technology, what we tried to do was get at least 20 to 30 points so that we could plot a home range.”

Then came GPS technology, which enabled researchers to essentially track real-time movements. The first of these new-age collars were known as “store-on-board” because the collars would stay on the animal for perhaps a year and the data could not be downloaded until the collars dropped off at the end of that year.

The GPS collars being used in the Panhandle pronghorn study are even more high-tech than that. Now the movement can be collected in real time; the data pings to a satellite, is downloaded daily, and automatically plotted. All the scientists have to do is go to the computer, punch a couple of keystrokes, and up pops the movement data of individual pronghorns. The collars are also solar-powered, and a reserve battery kicks in when there is insufficient sunlight.

“With this technology, we have tens of thousands of points for individual pronghorn,” says Fulbright. “It’s really awesome technology.”

Other scientists from Texas Tech University are doing diet composition work using DNA metabarcoding technology. This technology is much more advanced as well. In the past scientists used micro-histological methods whereby they identified diet composition by fecal collection and then learned to identify plants by their cell shapes or other unique identifiable characteristics under a microscope.

The DNA metabarcoding technology still requires fecal collection, but it looks at the DNA of the actual plants, and in that way individual plants consumed are more accurately identified.

The research is being conducted on two study sites, one in the northwestern Panhandle near Dalhart and another in the northeastern part of the Panhandle near Pampa. Both locations are similar in terms of the habitat. It’s primarily shortgrass prairie and sand sage type country intermixed with cropland.

In the Dalhart area there is a bit more habitat fragmentation in that more of the native rangeland is being broken out and put into crops such as winter wheat, some alfalfa and corn under irrigation, and cotton, milo, haygrazer, and potatoes.

The average annual rainfall for the Pampa site is a bit higher than in the northwestern panhandle. The Pampa site has some farming as well, though it’s primarily grazeout winter wheat, dryland cotton, and some milo and alfalfa. In the general vicinity of both study sites there are some 5000 crop fields.

Because the data can be downloaded in real time, the researchers were willing to offer some preliminary big-picture kind of results. Based on the first year’s worth of data, the home range estimate for the males in the winter is about 20 square miles. This was just an average with data from both study sites averaged together. In the final analysis, a home range will be calculated independently for each study site.

Preliminary results on cropland use is also similar for both study sites, with the heaviest use during the winter months, and considerably less in April through August. As anticipated, it appears that when rains come and there is a flush of native vegetation, the pronghorns prefer the native habitat over the fields.

However, the fields are a good source of nutrition when the native vegetation is dormant, during the winter months, for example, or during drouth. Researchers suspect that the fields have enabled the pronghorn population in the Panhandle to stabilize and then grow.

“The ag fields are really a two-edged sword,” says Gray. “That habitat loss is concerning, but it’s also clear that the fields help increase the nutritional plane of the pronghorn, so they are absolutely having a positive effect from a nutritional perspective.”

Still, the average annual fawn crop is only about 30 percent, which Gray says is more than adequate to sustain and/or increase the population. It’s rarely much higher than that, primarily because a lot of predators work on the fawns.

In the final analysis, researchers hope to have a good handle on which specific field crops the pronghorns prefer, and they’ll know more about the movement on and off these fields and how far into the interior of a field they’re willing to venture.

Another critical piece of the study is barriers to movement.

“We’ve known that roads are barriers to pronghorn movement since Tommy Hailey started writing about it back in the 1950s and 60s,” Gray said.

Already they know that Highway 70, which runs north and south of Pampa, is a barrier that the pronghorns will not cross, as they have several collared west of Hwy. 70. Other county roads and even dirt roads with fencing on both sides of the road may also prove to be physical barriers to movement. Preliminary data from pronghorns that reside on the McClellan Creek National Grassland also indicate that fences are restricting their movement.

One positive, Gray says, is that there is relatively little netwire fence in the Panhandle. The pronghorns can also easily see and navigate under hotwire fences and on barbed wire fences if the bottom wire is up off the ground a good bit it also not as much of a problem. In other states that have had barrier restrictions like that of Hwy. 70, a passageway has been built via a tunnel or by installing an overhead bridge for traffic under which the wildlife can then migrate. Both options are admittedly expensive.

After the project wraps up next spring, TPWD will utilize the data to help biologists and landowners in the Panhandle better manage the pronghorn population. In the northwestern Panhandle, for example, they may need to more intensively remove pronghorns for restocking in other parts of the state if crop depredation proves to be an issue. Or they may learn that the pronghorns are really not spending enough time on these fields to adversely impact the crops.

The in-depth analysis is expected to be completed sometime in the last half of 2019.