Home
The Texas Ocelot Population is Shrinking and Needs Our Help

The Texas Ocelot Population is Shrinking and Needs Our Help 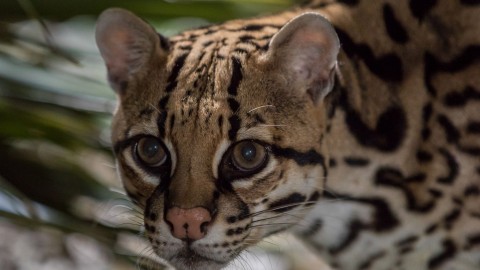 Texas is home to the last remaining populations of the U.S. ocelot, a small and beautiful cat that is often called the little leopard. Researchers estimate that only 50 to 80 of these magnificent and mysterious cats exist in Texas. Ensuring they have a future in the U.S will require cooperation between the federal government and private landowners, and the Caesar Kleberg Wildlife Research Institute at Texas A&M Kingsville is doing the rare research to support those efforts.

The ocelot used to roam South Texas, Louisiana, Arkansas and Arizona, but habitat loss, predation and fur trapping led to their decline.

“At one time, Texas had more cat species than any other state, with six cats. This Texas brag included the jaguar, margay and jaguarundi. If the ocelot disappears from the Texas landscape, we will only have the cougar and bobcat remaining. Losing biological diversity, especially something so special as this quintessential cat, will perhaps be among our greatest sins that our descendants will be least likely to forgive,” said Michael E. Tewes, a professor at A&M and a professor of wild cat studies at the Caesar Kleberg institute.

Today, the ocelot is one of only six wild cats in the United States, and because it requires a lot of space to survive, urbanization threatens its existence. A male ocelot typically ranges about 25 square miles and will defend his territory from other males. The females have a smaller range of about 9 square miles.

The ocelot is larger than a house cat, but smaller than a bobcat, and is recognizable by its distinct spots, rounded ears and long, ringed tail. Today, there are two populations of ocelots remaining in the United States, and both are found in deep South Texas. One population lives at the Laguna Atascosa National Wildlife Refuge in Cameron County and the other is on private ranchland in Willacy County.

“Ranchers in South Texas have quietly protected these rare cats for decades,” said Neal Wilkins, chief executive of East Foundation, one of the strongest advocates of ocelots in Texas.

A&M researchers confirmed that ocelots move mostly under the cover of night and their preferred habitat is the thickest and thorniest of brush thickets imaginable, making them difficult to study. Ocelots have a unique ability to turn their ankle joints around, enabling them to climb down trees effectively, and they are also good swimmers. These skills help them escape from their predators — bobcats and mountain lions that must rely on their retractable claws to do similar movements.

Unfortunately, the federally protected ocelot continues to decline and much of this is due to vehicle collisions. The Caesar Kleberg institute is actively involved in documenting and analyzing the ocelot’s movements so that protective measures like highway crossing structures along roadways can be implemented. Data on ocelot movements may also help transportation planners develop roads with less impact on ocelots. The institute is also studying methods to accelerate growth of new habitat for these animals.

The ocelot is regarded as one of the most elusive animals in North America, but Tewes and his team of scientists at the Caesar Kleberg institute, along with the East Foundation and documentarian Ben Masters, have made history by filming ocelots in their natural habitat. The result of this effort is Masters’ American Ocelot, a documentary short film due out next spring that is dedicated to bringing attention to these endangered cats.

The breathtaking imagery that Masters captured offers a rare glimpse into the lives of these mysterious cats. Capturing footage of them in their native habitat, which is full of thorns, extreme heat, bugs and thick cover, took tremendous determination and patience.

“I was incredibly intimidated at first trying to capture high-quality videos of wild ocelots, simply because no one had ever done it before in Texas. All in all, we ended up with over five hours of ocelot footage including behaviors that we could have never imagined,” Masters said. “My biggest hope is that the videos and images we captured can help further the restoration efforts of ocelots and their habitat as well as inspire landowners, government agencies and the public to become ambitious and forward-thinking about ocelot recovery efforts across their historic distribution in Texas.”

Masters said other areas of Texas where ocelots historically lived could support the cats again. “From the brush country along the Nueces River in South Texas to the thick river bottoms along the Trinity and Neches in East Texas, there are hundreds of thousands of acres of wild areas that could potentially support ocelot populations. What an incredible conservation legacy it would be to restore ocelots in our lifetimes from less than 100 individuals to over 1,000 and to increase their populations from two to 10 or even 20.”