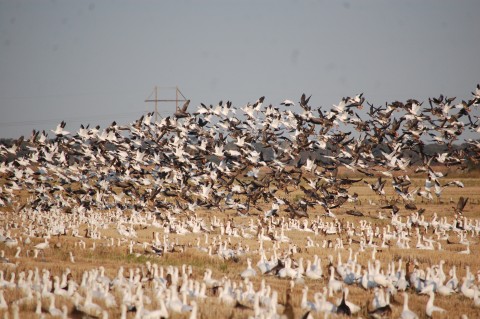 Each fall and spring, millions of migratory birds traverse the Texas skies as they make their journeys between temperate breeding areas and tropical wintering areas. The migration route draws national attention, and bird enthusiasts flock to Texas every year to witness the migration and bring with them the hopes of seeing some of the birds that make stopovers during the journey.

In the greater Dallas-Fort Worth area, you may have spotted a scarlet tanager or an array of songbirds in your backyard this spring on their way to their more northerly breeding areas.

Over 400 species use the region during the autumn and spring migrations. Some birds travel from as far north as Arctic regions of Canada, and some will travel as far as the southern tip of South America. Positioned at the nexus of this migratory corridor, the Caesar Kleberg Wildlife Research Institute at Texas A&M University-Kingsville is dedicated to providing science-based information for enhancing the conservation and management of wildlife in Texas. Recently, scientist Bart Ballard and his graduate students conducted a three-year study evaluating the movements of migratory birds along the lower Texas coast, and compared the behaviors of the birds between autumn and spring migrations.

The lower Texas coast remains relatively undeveloped and contains large tracts of potential stopover habitats that attract and support millions of birds during the migratory periods, making this area a major migration corridor. The Texas coast is a well-known corridor that attracts bird-watchers from around the world to witness the great diversity and abundance of birds during migration.

But the birds have competition. The same area that they rely on along the lower Texas coast is also heavily targeted for wind energy development.

“We always knew the lower Texas coast was important for migratory birds, but there had been nothing quantifiable to illustrate this or to compare to other regions. However, our findings revealed unprecedented passage rates of birds along the coast as well as intriguing disparities between autumn and spring migration strategies,” said Bart Ballard, research scientist and professor. Understanding these migration characteristics is a critical component of identifying the migrants most at risk and identifying the seasonal and daily periods when birds may be at most risk for collisions with wind turbines.

Kleberg scientists used radar technology specifically designed to monitor migratory birds at six locations along the lower Texas coast. The passage rates were among the highest recorded for any location in the world. In fall, the rates were 157% greater than spring.

This substantial difference in seasonal passage rate has three potential causes. First, fall populations are supplemented by newly fledged young from the prior breeding season. Second, considerable mortality can occur during the winter months, contributing to a lower return passage rate in spring. Third, the study found that migratory birds use different migration pathways between fall and spring, often because of a more direct route during spring.

The fall migration also takes place over a longer time period (late August to mid-November) versus the spring migration, which is concentrated largely within a four-week period in mid-April to mid-May. One idea that would explain this pattern is that during fall, birds may choose to minimize energy costs rather than time, and may be more selective about wind assistance to save energy during their southward migration.

During spring, the benefits of arriving early to breeding areas have led to a faster migration. Birds that arrive early to the nesting areas can benefit from reduced competition for territories and mates. Early arrival also allows for more time to re-nest if the first nest fails, and more food resources for young, which is important because food resources decline as the breeding season progresses.

During the fall, migratory passage rates are relatively equal during the day and night, but during spring, birds fly predominately at night and at a much higher elevation. Traveling at night and choosing a higher elevation allows birds to use cooler nighttime temperatures to minimize overheating and dehydration as well as utilizing the southeasterly winds off the Gulf of Mexico to their advantage. Most birds are visual foragers, and are unable to forage at night. Foraging during the day and traveling at night offers an efficient use of their time during the migratory journey.

Information from this study conducted enables resource managers to utilize environmental impact studies to improve their ability to curtail potential negative effects on birds. It also allows managers to determine whether strategies are effective for bird-habitat conservation and risk management of migratory birds.

In the past few years, major cities (including Dallas) have asked residents to participate in making the nighttime spring migration safer. Texans have been asked to turn off their lights, and even downtown skyscrapers have joined the effort to help make the Texas skies a safer passage. By working to ensure the safe passage of birds through Texas, everyone throughout North America is able to enjoy the songs and colors that migrating birds bring to our yards, pastures and forests.