Home
Wonder how the quail survive the heat?

Wonder how the quail survive the heat? 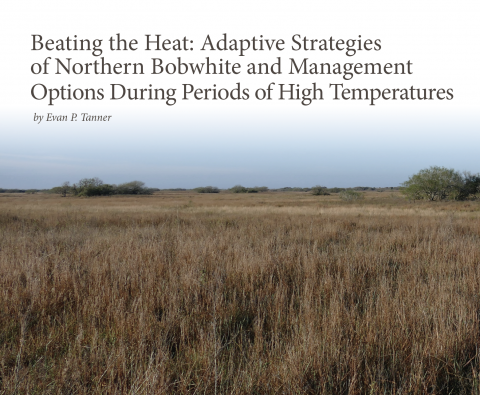 CKWRI’s Evan P. Tanner, Ph.D shares his recent findings on adaptive strategies of Northern Bobwhite and management options during periods of high temperatures in the most recent issues of Tracks.

Beating the Heat: Adaptive Strategies of Northern Bobwhite and Management Options During Periods of High Temperatures

In his 1933 publication titled Game Management, Aldo Leopold described the elements of a species’ habitat as: food, water, and cover. Fast-forward nearly a century later and these elements still form the foundation of wildlife research and management. We now use advanced field techniques and technology to gain a deeper understanding of the complex relationships between a species and their habitat. Food, water, and cover change in availability and quality across space and time in response to weather, soils, management, and more, adding complexity to how wildlife species use habitat to meet their daily, seasonal, and annual needs.

Physical conditions (such as temperature, precipitation patterns, or solar radiation) are fundamental in determining factors as large as a species’ distribution to as small as how an animal navigates its environment on a daily (or even shorter) basis. Temperature in particular is an important driver of an animal’s performance (i.e., survival). However, until recently, knowledge of how wildlife adapted to changes in thermal conditions in field settings was  lacking.

When an animal begins to overheat, it risks physical harm unless it finds a way to cool down. At the most basic level, there are two options for an individual: physical mechanisms (such as a dog panting) and behavioral changes (such as lying in the shade). Northern bobwhite may use a physical mechanism called gular fluttering to cool themselves. You may have seen birds gular fluttering during the hot days of the South Texas summer: a bird will have its beak open and its throat region (gular) rapidly vibrating. Though this is a direct way for many birds to lose heat, during times of extreme heat, even gular fluttering will not be enough to prevent overheating. This is where behavioral changes become crucial for thermal regulation.

Bobwhite, for example, may take refuge from the heat of summer by seeking out woody cover. Ask any up- land bird hunter or manager what one fundamental component of bobwhite habitat is, and they will inevitably answer “woody cover”. However, this woody cover is often valued primarily for its ability to provide cover from predators, particularly during the non-breeding season. Though woody cover does indeed pro- vide crucial structure for predator avoidance for bobwhite, this cover is also essential for individuals seeking an escape from the elements, or thermal refuge. These areas, often called “loafing coverts” or “mottes” (Figure 1), may only make up a small portion of a bobwhite’s home range (perhaps less than 10-20%). Yet these areas can be up to 20°F cooler than the surrounding areas lacking woody cover. This sort of  thermal refuge can provide much needed relief from the summer heat in South Texas, where temperatures can often exceed 100°F. Given that temperatures exceeding 102.2°F are dangerous for bobwhite, it is easy to see why these thermal refuges are an important component of bobwhite  habitat.

However, these behavioral responses to extreme heat could come at a cost if bobwhite must use areas with less food. For instance, when bobwhite broods select for thermal refuge during the heat of the day, their movement patterns can  be reduced to less than 100 feet during that period. If thermal cover has fewer insects and seeds, then     the bird may be forced to choose between staying cool and filling its crop. Furthermore, when an incubating adult leaves the nest to forage (known as an off-bout), they rarely do so during the heat of the day (Figure 3). This illustrates the concept Dr. Fred Guthery termed “thermal brinkmanship”,  which states  that bobwhite can often live on the edge of their thermal tolerance, and highlights the important role these physical mechanisms and behavioral changes play in the persistence of bobwhite in South Texas.

So as a land manager or landowner, what can be done with this knowledge? In South Texas, brush is likely not the limiting factor for thermal  refuge requirements. In fact, many landowners use methods of brush removal to promote growth of grasses and forbs to provide nesting and brooding cover for bobwhite. However, the removal of  woody cover in patches that are too large could result in areas that bobwhite cannot use during  periods of extreme heat. If we assume the average home range of a bobwhite in South Texas is 40 acres, there should be immediate options for  thermal refuge within that area. Approximately 30-40% of that home range should consist of woody cover (i.e., low-growing dispersed woody plants, shrubs, resprouting trees, etc.). So rather than removing entire sections of woody cover, a general recommendation would be to leave small patches (~0.2 acres) of woody cover intermittently throughout areas where brush control is a management objective. Furthermore, monitoring and controlling invasive grasses post-management is  crucial. Non-native grasses not only hinder the use of these areas by broods, but they may also make the pasture hotter during summer because of their structure (thick monocultures with dense leaf litter), thus adding additional heat stress to both brooding adults and chicks. Ultimately, the goal is to have areas for shade and areas for feeding and nesting close to one another. Moving takes work, work converts to heat in the bobwhite’s body, and thus management strategies that provide a mosaic of options within the bobwhite’s home range will help to alleviate the thermal pressures that  bobwhite experience in South Texas. 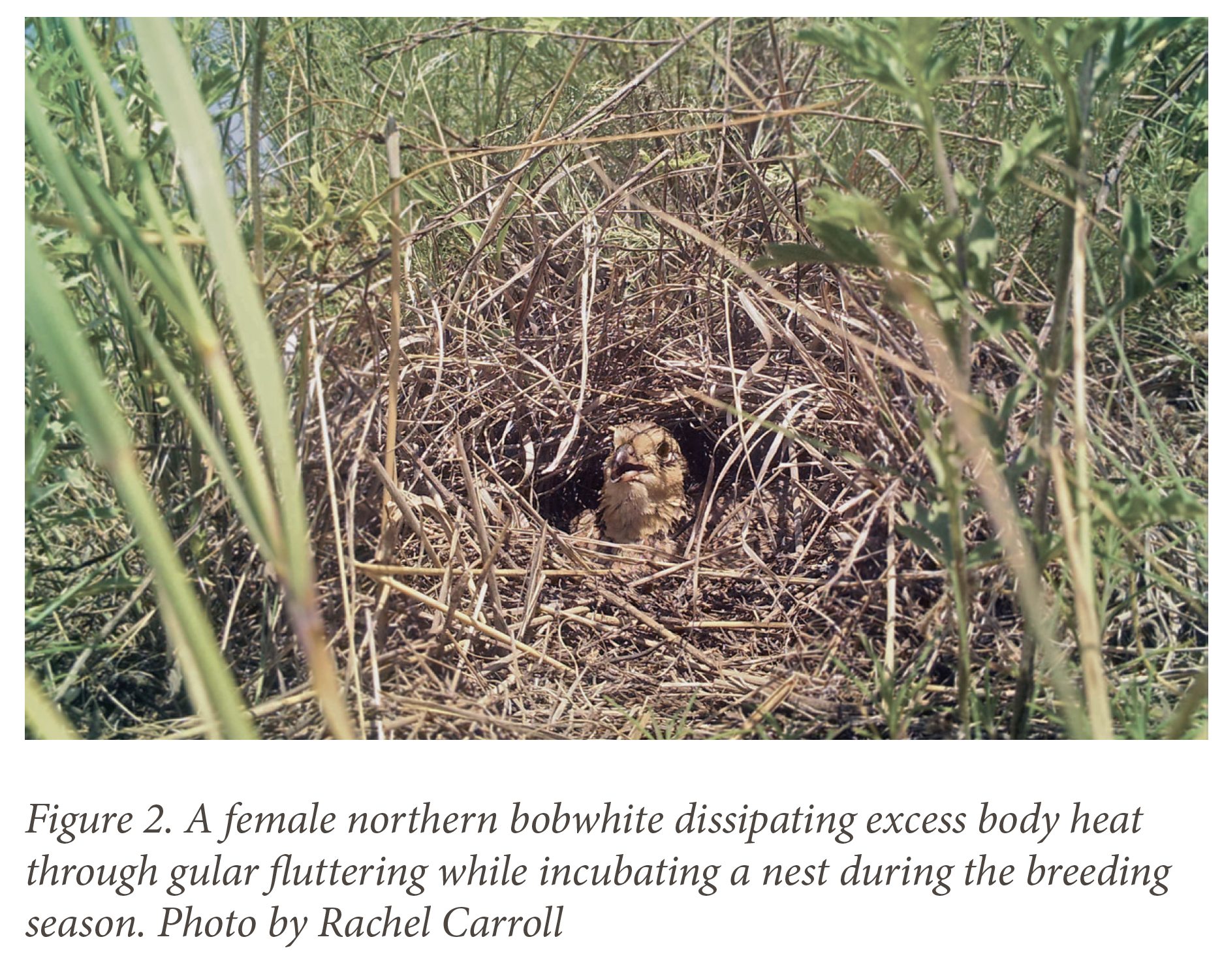 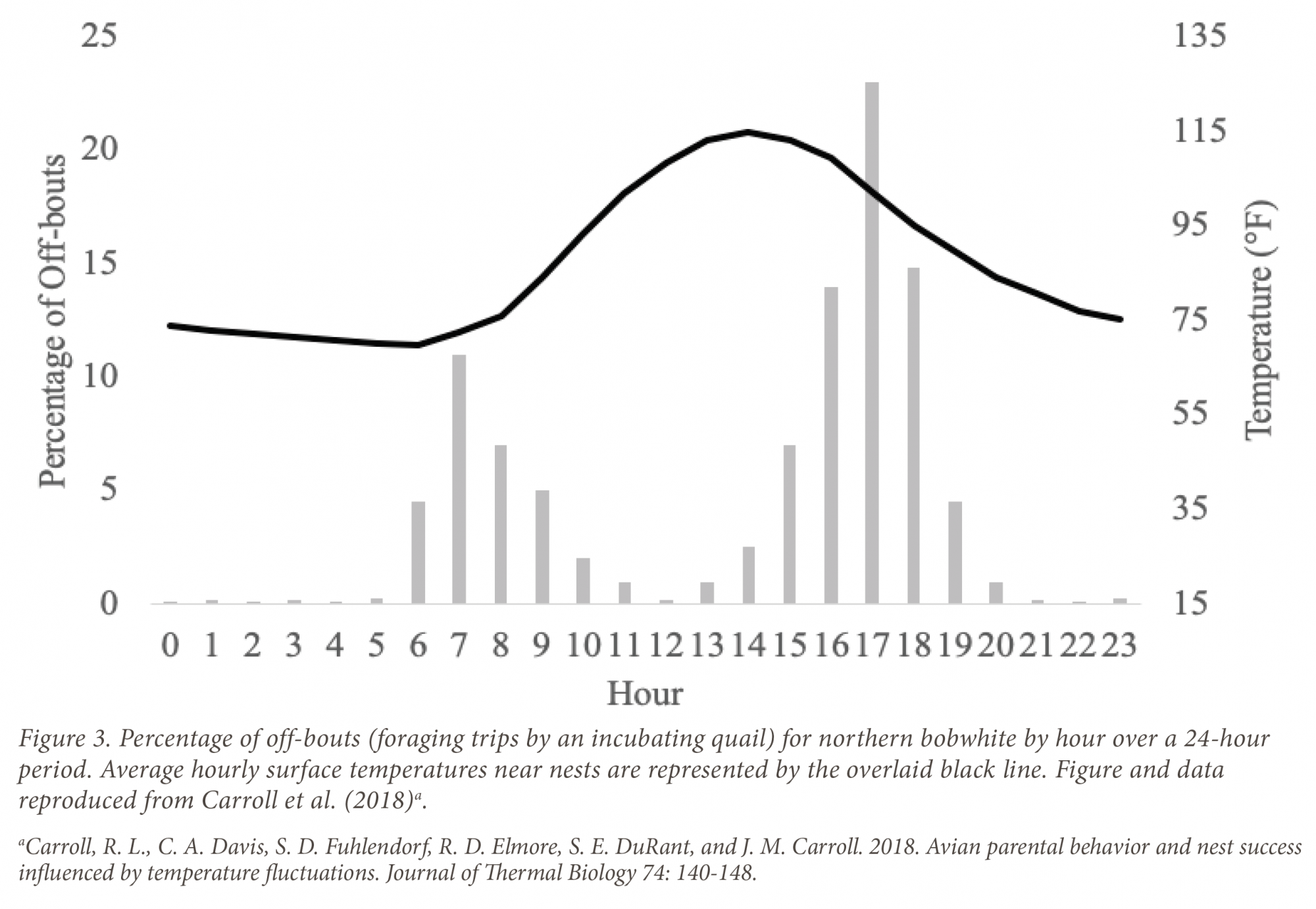