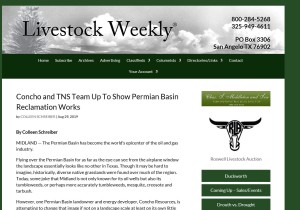 MIDLAND - The Permian Basin has become the world's epicenter of the oil and gas industry.

Flying over the Permian Basin for as far as the eye can see from the airplane window the landscape essentially looks like no other in Texas. Though it may be hard to imagine, historically, diverse native grasslands were found over much of the region. Today, some joke that Midland is not only known for its oil wells but also its tumbleweeds, or perhaps more accurately tumbleweeds, mesquite, creosote and tarbush.

However, one Permian Basin landowner and energy developer, Concho Resources, is attempting to change that image if not on a landscape scale at least on its own little corner of West Texas.

Concho has teamed up with Texas Native Seeds, a program under the umbrella of the Caesar Kleberg Wildlife Research Institute at Texas A&M University-Kingsville. Together they’re sharing a message about the value of regionally adapted native seeds directly through the use of native seeds in various reclamation projects in an on-the-ground effort and indirectly through educational events. Concho has provided financial support for TNS’s research and ultimately the development of a suite of regionally adapted native seeds for the Permian Basin to be sold through commercial seed dealers.

Forrest Smith is the head of TNS.

“Frankly, we wouldn’t be operating in the Permian without Concho’s, support,” said Smith. “They have allowed us to replicate what we’re doing in other parts of the state. Other supporters have since come to the table, but Concho certainly led the way.”

The big picture goal is to use energy development as a model to turn what is often viewed as an eyesore or a scar on the landscape and a detriment to the ecosystem as a whole, into something positive. They see not an eyesore but an opportunity.

“If someone chooses to do so, every pad site could be restored to a native grassland that benefits quail and other upland birds as well as deer and antelope, even butterflies,” said Smith.

Jesse Wood is part of Concho’s surface management team, one of the newer divisions within Concho which focuses specifically on furthering Concho’s stewardship ethic and reclamation work. Wood says the desire to develop this division came about because of the leadership of Tim Leach, Concho’s Chairman and Chief Executive Officer, and Joe Wright, the former Executive Vice President and COO, now retired. They believe wholeheartedly that Concho has the responsibility to be a good steward of the land on which it operates.

The surface management group has been in place for about 2.5 years. Currently there are five on the ground who work as a team on about 160,000 Concho-owned acres in Texas and New Mexico. Wood says their collaboration with TNS makes perfect sense.

“One of the biggest needs out here is the need to further support a stewardship effort,” Wood opined. “There is a lot of reclamation work that could be done and if there are adapted native seed sources available on a commercial scale, which we’re supporting, perhaps it will encourage others as well.”

Smith added that when they first began discussions with Concho’s Tim Leach it was immediately clear that it wasn’t just about his desire to improve his own land but also to steward the community as well, a community that he calls home. Midland, not Houston, is also where Concho’s headquarters reside.

“Tim’s view was that if they continued to do things like they’d done in the past, the Permian Basin wouldn’t be a very good place to call home,” said Smith.

Concho is not only a supporter of TNS’s research but also already a user of some of their recommended native seed mixes. Sam Lutfy, is the head of TNC’s Permian Basin division. He is the one who largely does the seed collections and the field trial research prior to a release being made available to seed dealers across the state to then grow and eventually make commercially available.

To date, Lutfy has made just over 300 collections in two years. Four plants from those collections were evaluated at a cooperating ranch, the Railway, near Odessa and the USDA NRCS Plant Materials Center at Knox City. Two grass selections, Permian whiplash pappusgrass, and Santiago silver bluestem, are now being grown by three seed companies. These two grasses are included in all of Conchos’s mixes, and the goal is to eventually have a whole suite of adapted native plants available specifically for the Permian Basin.

“We’re trying to put more thought into where the locations are going to be built and then have the infrastructure that goes along with that, all the pipelines and electric lines and other necessary infrastructure in one area,” he explained. “We also want to avoid the more sensitive or unique areas.”

Wood says more than anything with respect to reclamation work in West Texas, patience is required. Soil type also plays a role as does obviously the weather.

This year it worked in their favor and particularly so on their demonstration plots on the sandier sites on Concho’s Quail Ranch.

Another on a tighter soil type, however, is coming along as well, thanks to good fall and spring moisture.

“We’ve had some success, and that’s key,” says Wood. “With success, we can hopefully begin to gain some momentum and really begin to start making a difference.”

Smith opined that beyond basic diligence success of a rangeland planting is mostly about planting “the right seeds in the right spot” and TNS research backs that up.

He acknowledges too that there is a functional difficulty in the Permian Basin with respect to aridity and the long-term disturbance history. One bright spot is that unlike in other parts of Texas, South Texas in particular, introduced species, like the old world bluestems, are not as prolific in West Texas. That makes the potential for successful native seedings greater, Smith insists. Wood added that Lehmann lovegrass is one introduced species in the region, but its largely restricted to the sandier soils.

Specific to reclamation work, Concho has closed 33 old vertical frac ponds on their properties. All were reseeded with a TNS mix this spring.

They’re also in the process of restoring a 23-acre caliche pit, a challenge in and of itself because of the lack of soil.

“My goal was to establish something, because there was nothing,” says Wood. “It was not usable as far as habitat goes for anything. In that regard, I think we were successful because, while patchy, we did establish some grass, and hopefully over time it will just improve.”

Concho has also reseeded with a native mix substantial acreage where pipelines have been installed. Wood says they tailor the seed mix as best they can to the site.

“We might cross one, two or three soil types on a pipeline route,” he points out.

“There are certain spots that are better than others, but there are some that look really good, and the diversity is there,” said Wood. “Again we are showing it can work even in the Permian Basin.”

There are several “brush projects” planned over the next year or two, and the plan is to go back with a native mix on those sites as well.

For the moment, Concho is not looking to expand their efforts outside their deeded land. Still Smith points out that Concho is leading by example and through their efforts he’s hopeful that TNS will be able to further engage with some of Concho’s peers.

Lutfy says the most common question he gets is what to plant. TNS has the expertise to offer some guidance on that front. They also have a handle on the best contractors to use on seeding or restoration projects.

“They want an easy to follow recipe,” says Lutfy.

That said he also acknowledges more needs to be done with respect to outreach and education. On that front he has given a number of presentations to several groups in the city. He calls it “educational inoculation”. Getting in front of the right people, he admits, is his biggest challenge on moving the project forward. He has a demonstration native plant garden in downtown Midland which provides a learning forum as well. Additionally he and Wood have also done presentations at Concho’s field offices.

Already three other big operators are using the TNS recommended mix; two of them are using them on all their projects and the third is working with TNS on some mixes. Lutfy has also developed mixes for some 15 landowners.

Though many landowners are certainly not fond of pipeline rights-of-way, Smith and Wood see them as one potential long wildlife corridor. Last year Enterprise Products Partners LP approached TNS about a native seed mix to benefit wildlife to use on their Shin Oak NGL Pipeline. Some 8000 acres of rights-of-way running from west of Midland to just east of Houston were seeded with recommended native seed mixes. The project was broken into six eco-regions and TNS’s recommended mix was used when no other seed mix was specified by the surface owner.

“I expect that two to three years from now there will be good stands of native grasses on a great majority of it.”

Smith said there were challenges, namely making sure that the seed supply needed was available, but they overcame that.

“The main reason it worked is because there was a company who was willing to say, ‘this is what we want’, and hold fast to that,” said Smith.

TNS had done it on smaller rights-of-way; then Enbridge took it to scale in South Texas on the Valley Crossing.

“The Valley Crossing restoration encompassed 42 contiguous miles of pipeline easement in deep south Texas,” Smith said, “and then last year Enterprise took it to an even larger scale across the whole state.”

Smith said these projects show there’s a model for other largescale pipeline restoration projects to follow. It’s particularly timely given that 20 more pipelines are to be built across the state in the next 20 months.

Given the growth in the frac sand mining business in Texas, and the issues with the dunes sagebrush lizard living in parts of the Permian Basin, Smith said he would like to see TNS transition into sand mine reclamation as well.

“I think we can help with a lot of that, but we haven’t yet found the Concho of the sand mine industry. We need to find that partner.”

Concho and TNS are optimistic that they can indeed have a positive impact on the Permian Basin ecosystem. Hand in hand they are working to convince and enable other oil and gas operators, and landowners as a whole, that 4000 one-acre pad sites can be 4000 one-acre restoration sites that ultimately can become a healthy functioning ecosystem once again for plant and animal life.

Smith admits that doing it to scale is the biggest challenge.

“This was not degraded in a year or two, and we’re not going to restore it or even build the capacity to restore it in a year two or even, five or 10,” Smith says. “This is likely a 15 to 20 year effort.”

However rather than view it as a challenge, Smith sees it as an opportunity.

“If there’s any industry that can do things to scale out here, it’s the oil and gas industry. This industry can go from zero to 100 like nobody if they can be convinced that it is worthwhile,” he concludes.