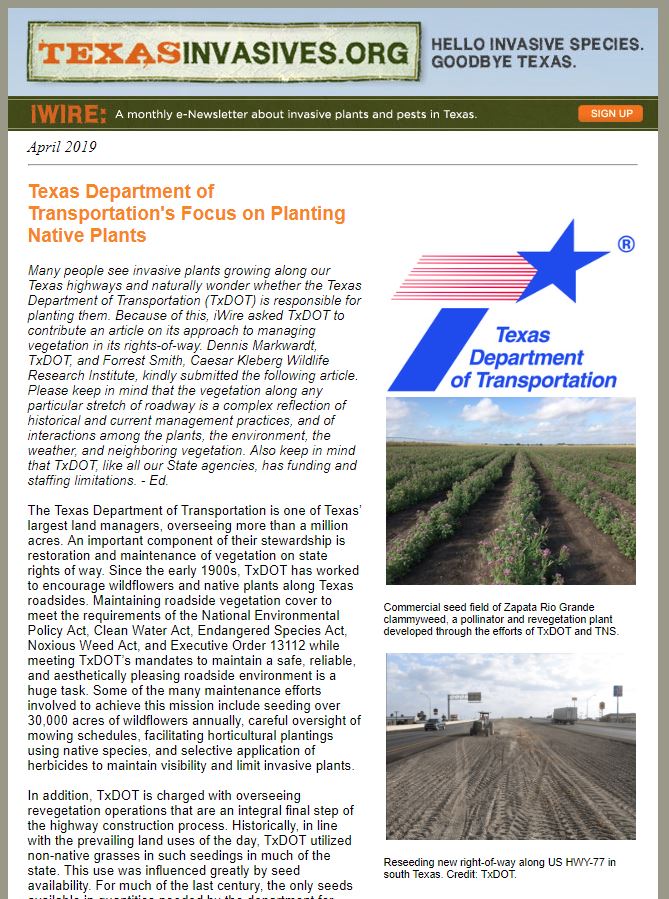 Many people see invasive plants growing along our Texas highways and naturally wonder whether the Texas Department of Transportation (TxDOT) is responsible for planting them. Because of this, iWire asked TxDOT to contribute an article on its approach to managing vegetation in its rights-of-way. Dennis Markwardt, TxDOT, and Forrest Smith, Caesar Kleberg Wildlife Research Institute, kindly submitted the following article. Please keep in mind that the vegetation along any particular stretch of roadway is a complex reflection of historical and current management practices, and of interactions among the plants, the environment, the weather, and neighboring vegetation. Also keep in mind that TxDOT, like all our State agencies, has funding and staffing limitations. - Ed.

The Texas Department of Transportation is one of Texas’ largest land managers, overseeing more than a million acres. An important component of their stewardship is restoration and maintenance of vegetation on state rights of way. Since the early 1900s, TxDOT has worked to encourage wildflowers and native plants along Texas roadsides. Maintaining roadside vegetation cover to meet the requirements of the National Environmental Policy Act, Clean Water Act, Endangered Species Act, Noxious Weed Act, and Executive Order 13112 while meeting TxDOT’s mandates to maintain a safe, reliable, and aesthetically pleasing roadside environment is a huge task. Some of the many maintenance efforts involved to achieve this mission include seeding over 30,000 acres of wildflowers annually, careful oversight of mowing schedules, facilitating horticultural plantings using native species, and selective application of herbicides to maintain visibility and limit invasive plants.

In addition, TxDOT is charged with overseeing revegetation operations that are an integral final step of the highway construction process. Historically, in line with the prevailing land uses of the day, TxDOT utilized non-native grasses in such seedings in much of the state. This use was influenced greatly by seed availability. For much of the last century, the only seeds available in quantities needed by the department for erosion control plantings were introduced forage grasses, late-seral native species that were difficult to establish, or annual grains.

As times have changed when it comes to Texas land uses and desired vegetation, so too has TxDOT. One of the greatest limitations to using native plants in revegetation endeavors, for TxDOT and landowners, as mentioned above, is an adequate supply of appropriate native seeds that will meet mandated establishment and cover criteria. For successful native seedings it is widely acknowledged that ecotypic (locally adapted and originating) native seeds must be used. In addition, quality, cleanliness, and consistency of native seed supply were perennial limitations to the department’s use of native seeds. This was in part because many available native seeds were either wild harvested or lacked quality control in production and marketing.

In the late 1990’s, the leadership and staff of TxDOT began advancing discussions with researchers, landowners, and seed producers toward addressing these limitations, particularly in South Texas where demand was especially acute for native plants as land uses shifted toward being wildlife-focused. Beginning in 2001 and continuing to the present, TxDOT, with partners including the Caesar Kleberg Wildlife Research Institute, USDA NRCS Plant Materials Centers, and Texas AgriLife Research began focused efforts to solve native seed supply and quality limitations, and to enable greater use of native plants for roadside plantings.

This partnership resulted in the South Texas Natives Project beginning work in 2001. Since 2011 this effort has expanded to serve the entire state through the Texas Native Seeds Program (TNS). TxDOT remains a signature sponsor of this effort, which has developed over 40 ecotypic native seed selections produced by Texas seed companies. The resulting Texas Department of Agriculture-certified origin and quality native seed are used for tens of thousands of acres of native plant restoration both on Texas roadsides and off by landowners and energy operators, especially for new oil and gas pipeline revegetation.

TxDOT currently specifies these native seeds for use in rural areas of two-thirds of Texas, and is currently supporting efforts led by TNS to provide needed seed supply for the Coastal Prairies and East Texas regions. Recent focus has also been on the development of seed supplies of pollinator- and monarch-plants for use throughout Texas on roadsides, including native wildflowers, perennial herbaceous plants, and milkweeds.

TxDOT is poised to continue working to promote native plants for Texas roadsides for years to come. The development and use of native seeds, diligent management of invasive species, and careful stewardship of right of way vegetation is a high priority of the agency and proud parts of the department’s legacy.

See also this video from TxDOT.