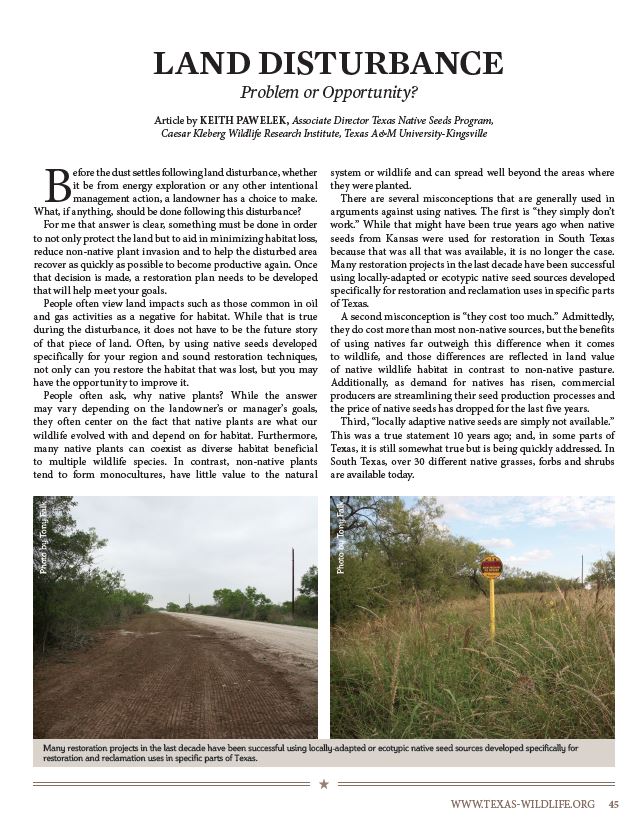 Before the dust settles following land disturbance, whether it be from energy exploration or any other intentional management action, a landowner has a choice to make. What, if anything, should be done following this disturbance? 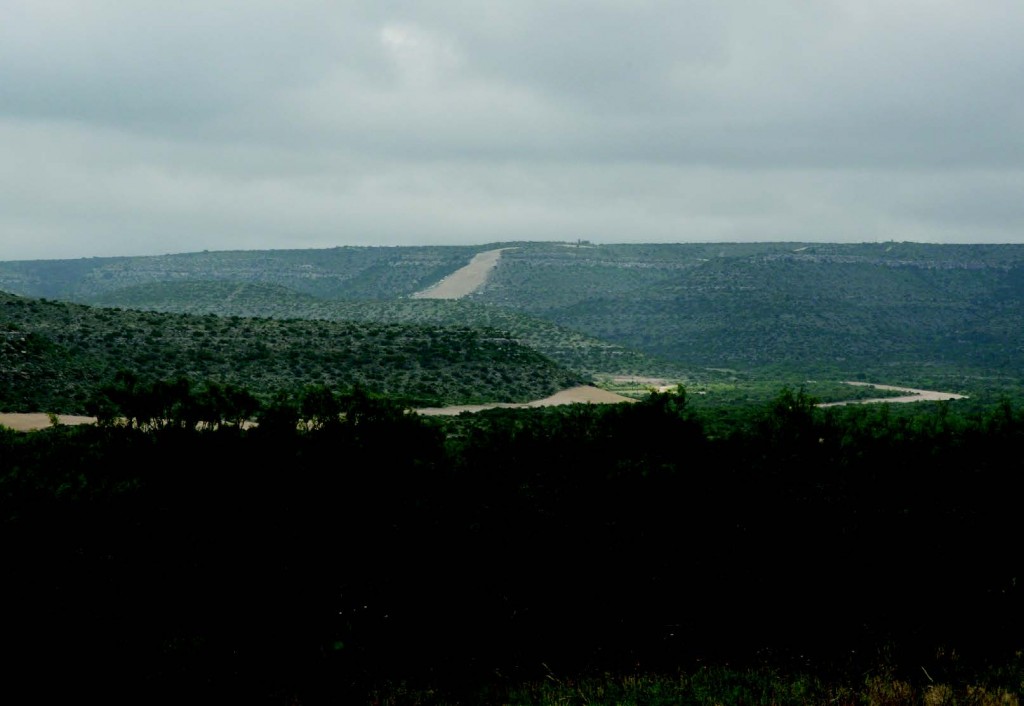 For me that answer is clear, something must be done in order to not only protect the land but to aid in minimizing habitat loss, reduce non-native plant invasion and to help the disturbed area recover as quickly as possible to become productive again. Once that decision is made, a restoration plan needs to be developed that will help meet your goals.

People often view land impacts such as those common in oil and gas activities as a negative for habitat. While that is true during the disturbance, it does not have to be the future story of that piece of land. Often, by using native seeds developed specifically for your region and sound restoration techniques, not only can you restore the habitat that was lost, but you may have the opportunity to improve it.

People often ask, why native plants? While the answer may vary depending on the landowner’s or manager’s goals, they often center on the fact that native plants are what our wildlife evolved with and depend on for habitat. Furthermore, many native plants can coexist as diverse habitat beneficial to multiple wildlife species. In contrast, non-native plant tend to form monocultures, have little value to the natural system or wildlife and can spread well beyond the areas where they were planted.

There are several misconceptions that are generally used in arguments against using natives. The first is “they simply don’t work.” While that might have been true years ago when native seeds from Kansas were used for restoration in South Texas because that was all that was available, it is no longer the case. Many restoration projects in the last decade have been successful using locally-adapted or ecotypic native seed sources developed specifically for restoration and reclamation uses in specific parts of Texas.

A second misconception is “they cost too much.” Admittedly, they do cost more than most non-native sources, but the benefits of using natives far outweigh this difference when it comes to wildlife, and those differences are reflected in land value of native wildlife habitat in contrast to non-native pasture. Additionally, as demand for natives has risen, commercial producers are streamlining their seed production processes and the price of native seeds has dropped for the last five years.

Third, “locally adaptive native seeds are simply not available.” This was a true statement 10 years ago; and, in some parts of Texas, it is still somewhat true but is being quickly addressed. In South Texas, over 30 different native grasses, forbs and shrubs are available today.

So, when and where do you start? First,know your goals and plan accordingly. If it is oil and gas-related work, be clear with the company representative (or your lawyer) on what you want done. This
should be negotiated in the surface use agreement or easement. You might even want to consider requesting damage fees and using those funds to contract or do the restoration work yourself so that the work can be done on the appropriate timeline and not just when the energy operator is done with the project.

Second, require a site inventory before the work begins so that you have a clear picture of the existing habitat before the work was started and how you might want to alter that to achieve your goals. For example, planting grass along a pipeline that was solid brush could offer habitat diversity while also making the area more accessible.

Next, it is time to develop the seed mix to be planted. This can be done using your site inventory as a base line and adding species to that list that would both benefit your specific goals as well as be
appropriate for the site.

Not every native plant species is appropriate for every site, so doing research or seeking qualified help is a good idea. Anyone from our South Texas Natives project or Texas Native Seeds Program is happy to aid in seed mix development, or there are many private consultants or Natural Resource Conservation Service personnel that can help as well.

Often, species that might have been grazed out in the past, or wildlife food plants and pollinator species that are not present are added to enhance the habitat provided. In many cases, seed
mix procurement should occur well in advance of planting to insure availability of desired seed varieties.

The next step is maintaining the site’s soil integrity. If the disturbance involves deep soil construction such as pipelines or pond construction, it is important that the soil get put back in the order it was removed, and the topsoil is set aside and redistributed on the top once construction is complete.

Topsoil is one of the most precious and fundamental necessities for restoration and should be handled with care. When trenches for pipelines are dug, we recommend “double ditching.” This is a method in which the immediate topsoil is removed to one side, the trench is then dug, and soil stored to keep the topsoil and the subsoil separate. Following construction, the layers are put back in the same way they came out to prevent subsoil from being mixed with the topsoil and causing problems such as high  salinity.

Once the construction or disturbance is complete, it is important to conduct final site preparation for seeding. This can include contour sculpting and installation of terraces to control runoff if needed.

A clean, weed-free seedbed will give you the best chance of a successful seeding. In addition, a firm seedbed is recommended. For example, soil should be firm enough that when you walk across the site in boots, dirt does not get on the top of your sole. A firm seedbed is important for necessary seed-to-soil contact and to retain soil moisture.

Following good site preparation, you are ready to plant. The equipment needed is often based on the site conditions and can even vary across a site. We generally recommend drill planting when possible, but broadcasting followed by packing is often needed for rough terrain. Hydro seeding is often the best method for steep slopes.

The seed is the most important part of planting. We  ecommend native, local ecotypic seed sources of known quality when planting.

When planting native seed, placement depth is also very important. We use a depth of ¼ inch or less as a general rule. This depth might require seed drills to be equipped with depth bands to ensure
proper planting depth. Conventional grain drills often place the seed at 1 inch or deeper and most native species seedlings will not establish readily if planted that deep.

In general, if you don’t see at least some seed on the soil surface during planting you have planted too deep.

Not every contractor has or is willing to get the correct equipment for planting native seeds, so keep that in mind when selecting a contractor.

The second most important part of planting is timing. We generally recommend late summer/early fall plantings (Aug. 15 to Sept. 30) as the most favorable in South Texas. Early spring plantings up to 60 days following the last frost date are also acceptable, especially further north.

If forced to plant outside of those two windows, cover crops are recommended to aid in minimizing runoff and holding the soil together until conditions are more favorable for the seeded species. Cheap
and effective cover crops to consider are browntop millet in growing season, and oats in autumn or winter.

The last and often most difficult step following seeding is to be patient. Native plants have evolved to come up only when conditions are favorable—one rain might not be enough to prompt the seeds to germinate. Germination of certain plants can also be daylight and temperature sensitive.

Prior to and following emergence, it is recommended to minimize disturbance of the restoration site and allow the plants to fully set seed at least one time before grazing. Later, weed control can
be considered if grass production is a priority or shredding or disking could be considered if forb production for wildlife food and pollinators is a primary goal. Spot spraying for non-native plants might
also be necessary.

By following the steps above, land disturbance can be turned into a positive for many properties, and will help minimize any habitat loss in even the most pristine properties. So, the next time you have any type of land disturbance coming through your property, use native seed plantings to turn potentially detrimental habitat disturbance into an opportunity to improve the wildlife habitat on your property.

This article was published in the May 2019 issue of Texas Wildlife, magazine of the Texas Wildlife Association (TWA). It is reprinted here with permission from TWA (www.texas-wildlife.org).